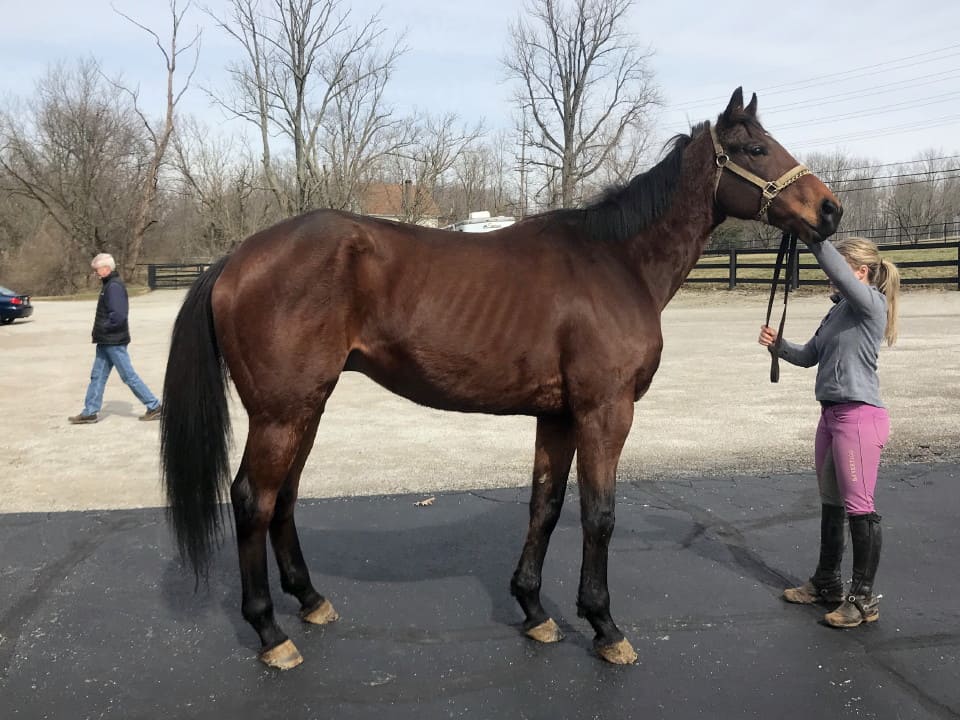 Carries himself bigger than he is and is a fabulous mover

Safe Passage aka ‘Paddy’ is a 2013, 16.1 hh gelding. He last raced on December 20, 2018. He has been enjoying some barefoot time being turned out and getting to be a horse. These pictures do not do him justice. He is a big boned good looking guy who moves so free from his shoulder and hip. He naturally oversteps at the walk. Again, he is barefoot and we had him trot up and down about 15 times on the asphalt and not once did he hesitate or take a bad step. He should make a fabulous dressage horse or maybe even an eventer.

‘Paddy’ carries himself like a much larger horse than he is. He does have some racehorse ankles of which the owner has x-rays. They will be included for release to anyone interested in him and can be compared to x-rays you will have done in a prepurchase exam. He retired sound. We feel that he is not for a novice first-time horse owner because he has real talent and should go to someone who can retrain him to his full potential. He has way too much potential to just sit around.

Safe Passage is a well-bred horse. His sire is Congrats who won almost a million dollars and is a son of A.P Indy who is the son of Triple Crown winner Seattle Slew. Congrats raced and placed in stakes races until he was six! Congrats shuttles between Kentucky and Australia as he is in that much demand as a sire. On his dam’s side, Safe Passage is the grandson of Street Cry who won over $5 million dollars and is the sire of the great racing mare Zenyatta, Street Box and Winx. Street Cry is also a world-traveling sire also shuttling between Kentucky and Australia. Click on the Pedigree and Race Records links below to learn more about this very well bred horse.

‘Paddy’ is vice-free and up to date on everything. He travels quietly on a trailer. He cross-ties (most racehorses do not). He has been ridden in an Australian stock saddle and does not mind it at all. He has no muscle and no topline as he has been retired since December just standing in a field. He could use about 150 pounds too. That is an easy fix. Put some training and feed into this horse and you will have a magnificent horse that will be noticed in the show arena. If you have a good eye you know what we mean. If you don’t, oh well. You might just miss out on what we call a ‘diamond in the rough’. Take a look at his sire Congrats to get an idea of what he could be. 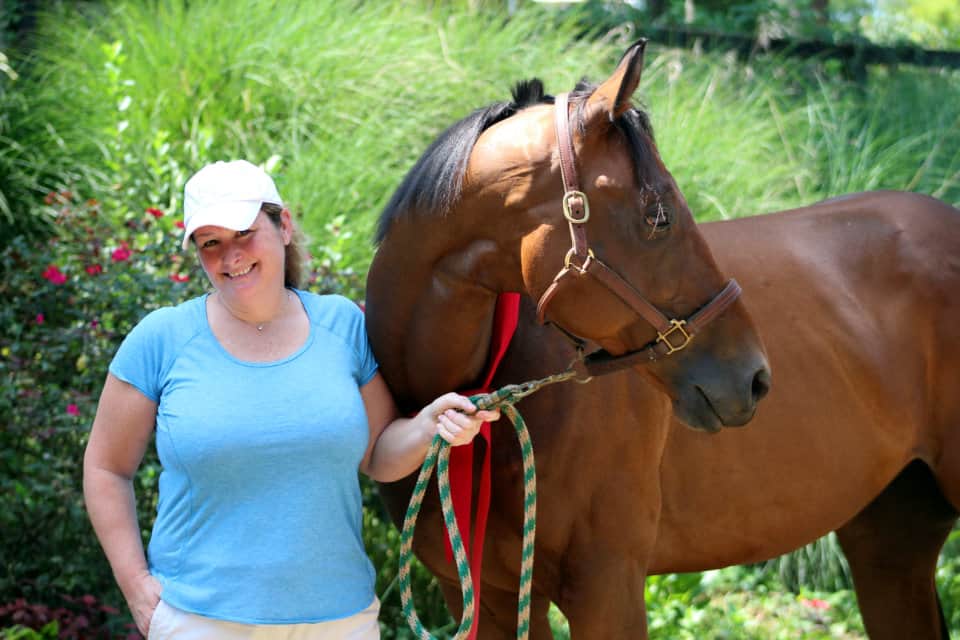 UPDATE August 2019: Safe Passage aka ‘Paddy’ has been SOLD! Congratulations to Anne Michele Jamros of Canton, GA on the purchase of Safe Passage. ‘Paddy’ will be boarding at Bits & Bytes Farm in Canton, GA so we will have lots of great updates on this beautiful, kind, sweet horse.

What is the price of this horse?

Prices are not published because the price can go up or down depending on how the horse is racing. Most horses average $3500 but can be as low as $1000 or up to $5000. We will share the prices when you call. If the horse you call about is not in your budget, we may be able to recommend another horse that is.

What is the Jockey Club name of this horse?

Jockey Club names are not usually listed on the site as the sellers do not want calls from people who have not been screened by us for having the skills to help these horses into new careers. Most horses come with their Jockey Club papers and we will be happy to provide links to their race records and pedigrees when you make the decision to move forward with a purchase. Horses’ whose names are in quotes are not the actual name of the horse. That is the nickname we have listed the horse by.

Where is this horse located?

READ these pages and then CALL . . . Between 9 AM-9 PM East Coast time.  Before you call, you can save us all a lot of time by reading the information on these pages on our Bits & Bytes Farm Web site.

Please read our Pricing Information and Buying a Track Prospect Horse pages BEFORE calling! There are several more pages under the Buying Our Horses button. Prospect Horses at the Track will only be sold to buyers with the skills and support to make it a successful transition. Prospect Horses are NOT at our farm. They are at the track or their owners’ farms. We do not sell horses for racing.

CALL if you are excited about one of the horses, but PLEASE READ the links above. We will not sell a horse if it is not a good match – no matter how much money you have. Are you a match? CALL and we can see.

We are not going to talk you into buying a horse! More likely we will ask you to tell us about yourself and your goals. Then, we will help you find the right match or tell you to wait for other horses because none of the current horses are a match.

Prices change based on what price the owner has set. We add a small markup for our services. Prices can go up or down based on how the horse is racing or how quickly the owner wants the horse sold. Most Prospect horses are priced under $5000 with the average being around $3500. Big sound geldings, grey horses and tall horses usually cost more — but not always. Small mares are your best bet if you are price sensitive.

Please read our Pricing Information and Buying a Track Prospect Horse pages before calling. There are several more pages under theBuying Our Horses button at the top of this page. Prospect Horses at the Track will only be sold to buyers with the skills and support to make it a successful transition.

We DO NOT SELL HORSES FOR RACING!

We can’t help you if you don’t call. Adults only please. Minors should have a parent or trainer call for them. 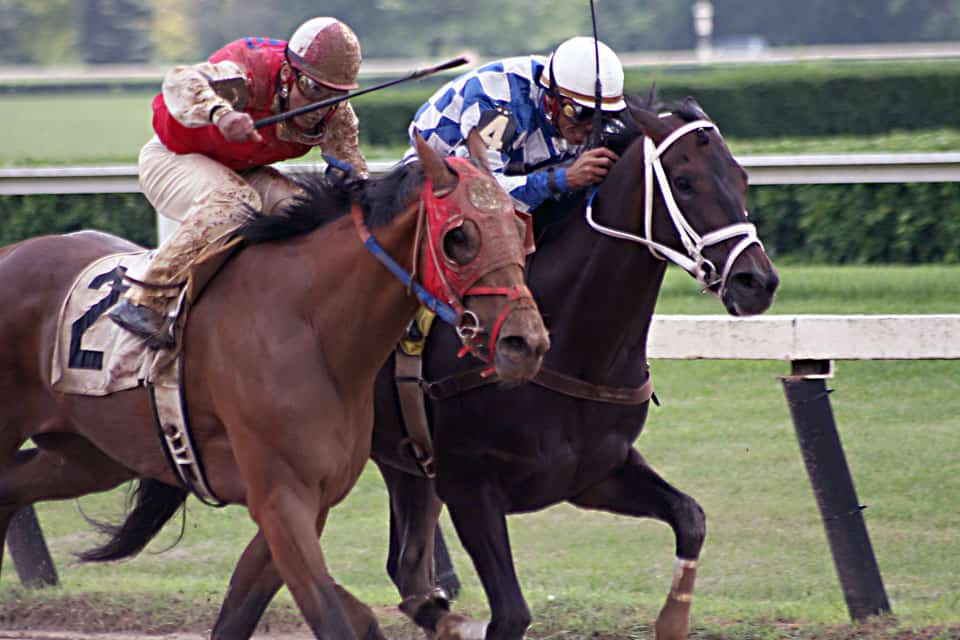 Lynn’s Vision aka Bubba at his last race – July 5, 2008. He was purchased by Melanie Eberhardt right after this race and brought back to Bits & Bytes Farm the next day. Melanie was riding him just one day later and he was a complete gentleman.

This site uses cookies. By continuing to browse the site, you are agreeing to our use of cookies.

We may request cookies to be set on your device. We use cookies to let us know when you visit our websites, how you interact with us, to enrich your user experience, and to customize your relationship with our website.

Click on the different category headings to find out more. You can also change some of your preferences. Note that blocking some types of cookies may impact your experience on our websites and the services we are able to offer.

These cookies are strictly necessary to provide you with services available through our website and to use some of its features.

Because these cookies are strictly necessary to deliver the website, refuseing them will have impact how our site functions. You always can block or delete cookies by changing your browser settings and force blocking all cookies on this website. But this will always prompt you to accept/refuse cookies when revisiting our site.

We fully respect if you want to refuse cookies but to avoid asking you again and again kindly allow us to store a cookie for that. You are free to opt out any time or opt in for other cookies to get a better experience. If you refuse cookies we will remove all set cookies in our domain.

We provide you with a list of stored cookies on your computer in our domain so you can check what we stored. Due to security reasons we are not able to show or modify cookies from other domains. You can check these in your browser security settings.

We also use different external services like Google Webfonts, Google Maps, and external Video providers. Since these providers may collect personal data like your IP address we allow you to block them here. Please be aware that this might heavily reduce the functionality and appearance of our site. Changes will take effect once you reload the page.